Silos maximise the level of ignorance within an organisation

This statement is taken from the extraordinarily talented Alberto Brandolini’s book “Introducing Eventstorming”.

He doesn’t exactly mince his words, does he!

Organisational silos are not the same as organisational departments; at least they don’t have to be. But, departments can become silos if communication doesn’t flow as freely as it could both within them and between them and this can lead to information bottlenecks or delays at the interfaces to the silos.

In a siloed organisation, simple processes take longer to execute. The search for answers takes longer; every silo has its own “truth” and its own focus. Decision-making is more difficult as not all the required information may be available to the decision-maker. On the plus side, silos enable organisations to reduce the learning curve for new employees and this can be exceptionally valuable in organisations undergoing rapid growth. But, it can come back to bite them if the employees feel powerless to question the status quo or to make change happen.

Having a silo mentality or structural silos can make it more difficult for the organisation to respond to change or to become more agile. It can only move as quickly as its slowest moving part and if that part isn’t prepared to budge…

The best analogy that I can give in terms of the impact of silos is of multiple musicians playing on their own rather than as part of an orchestra and everyone wants to be the soloist.

When we talk about at software delivery evolution, we are focused on moving the delivery team forward in a manner that is aligned with business drivers. Silos and silo mentality impede that alignment. Business processes often touch multiple silos and we need to understand these processes irrespective of “whose turf” we are on.

When we work with people from different departments and pose the same business problem to them, and we facilitate a workshop where they can share the same space and focus on the problem rather than on the boundaries of the silo (and who is responsible for each part), we end up with a myriad of potential solutions. We also create an awareness of the impact of certain solutions and get to discard them early.

Eventstorming is a technique that allows us to collaboratively build a visual model of a complex problem space – we use it to create a model of a business process. It enables us to create a bridge across the silos and creates visibility of an end-to-end business process without stepping on any egos. It allows us to identify black holes (parts of the process that only one person understands) and question why they exist at all and it does it in a non-confrontational manner. Eventstorming is a great way to establish a process baseline. The resulting clarity is essential to allow us understand the existing way of working, warts and all. And, once we understand it, we can improve it – together.

When you get rid of silos and silo mentality, you are facilitating growth. You can expect to see team members take more responsibility for their actions and become more proactive.

When you take away the fear of repercussions, amazing things happen. 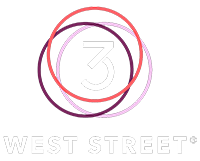 Contact the 3WestStreet team and we’ll be happy to share some further insight into our projects with you.

With Evolution, We Look for Low-Effort but Powerful Changes